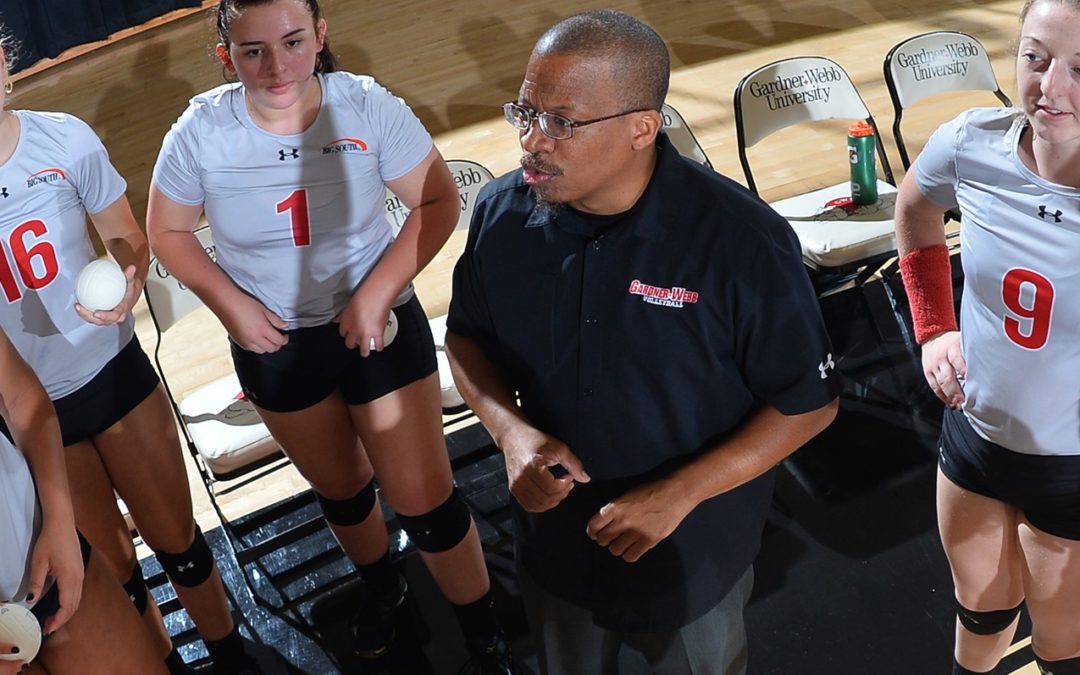 “Networking” sometimes gets a bad rap in our industry. It can often seem smarmy and the adage that “it’s not what you know, it’s who you know” can hold some truth when it comes to job hunting. Thus, the term “networking” often comes accompanied by an eye roll. But negative connotations aside, networking is also a wonderful part of the coaching life and in general, is a major part of the human experience! I have been so blessed to have a great network of friends in the coaching community and it has never shown up more than in the doors that have been opened to me on these journeys across the country to observe and learn.

Coaching Update: As I finished up this writing and tossed it over to Coach Sayles for a read through, he asked that I hold off on posting it due to a major career announcement he was about to make. On Friday, December 7th, he announced that after 8 seasons at Gardner Webb, he is moving on to another coaching opportunity at Grove City College. His new position includes an “associate athletic director for sports ministry” role that is such a perfect fit for him. I am so happy for my friend and believe that he will have a huge impact at his new school and with the added responsibilities!

Season and Program Context: Coach Leo Sayles is in his 8th season at GWU. Universally respected by his peers as a great guy and positive mentor, he wears his faith on his sleeve and it drives him in everything he does. He recently came out with a devotional book called “Ordering Our Steps” that should be on the shelf of every faith-based coach and athlete!

I visited at the beginning of October, so they were part of the way into their conference season having come off their first conference win of the year. It’s a very young squad with only 1 senior, but the talent it there. They are pretty healthy with only one major injury and no one else on limited reps. Therefore, today’s practice is a pretty intense mix of skills reps and prepping for their next conference match at UNC-Asheville.

Practice Set Up: GWU Volleyball plays in the Paul Porter Arena which they share with basketball and wrestling. The athletic facilities and the way the are nestled into the well-manicured, hilly campus are a stirring sight during the day but even more so when lit up at night. For today’s practice, they had 2 courts set up with platforms ready and a central table area with scoreboard controls and the training staff. I finally found a place that prints paper copies of their practice plan and each coach (Coach Sayles has two assistants) has one in hand!

Beginning Huddle: Coach began by going over the scouting notes for tomorrow’s match and how they were going to use practice to work on those things. Having not drawn out the practice plan on a board for all to see, he spent a minute telling the team what to expect during today’s session. This is how I have done it for years, but I certainly see both sides of the debate. He ended the talk by asking if anyone had any prayer requests. Obviously, this doesn’t happen at many schools, but Gardner Webb is a strongly faith-based school, and Coach Sayles embodies that and builds it into his program. The players readily shared some joyous things to be thankful for and some upcoming things that they or their families would be facing in their lives. We all joined hands and prayed before breaking out into warm up. Whether you share the faith or not, no coach could look at that and not feel the unity and family feel within the team!

Practice: Warmup was pretty standard with the captains directing agilities and dynamic movements followed by some basic pepper. Once everyone was loose, they went right into serve work. I perked up to see serving happening so early as it sometimes is an afterthought in a practice plan. Their primary servers worked on pace but had consequences if they missed their first serve or didn’t get 4/5. This seems like a reasonable mix of aggressive with room for error but not sloppy and the servers were absolutely going for it.

Culture Note: While it was only their primary servers doing the reps, the non-servers were very engaged by shagging, calling in/out, and encouraging. It always speaks well of a team culture when the “off” players aren’t checking out or just going through the motions!

After a Quick Drink Break, they split out for some blocking work on one court and some defensive work on the other. They hadn’t seen a lot of left-handed hitters yet this season and they would be facing one in their next match. Therefore, the blocking court was working on lining up vs. a lefty who was hitting off a box. On the other court, the defenders were working on defensive alignment versus an outside and who would have what responsibilities based on the tendencies of their next opponent.

Structure Note: In addition to having practice drawn out on paper for his staff, they also had times set for each segment of practice. This time was put on the clock, so everyone knew how much longer they had for the activity. This is something that I hadn’t seen done this strictly until now, but I would see it again part of the time at Winthrop and again at Nebraska.

Following the split out, they combined on one court for some out of system work. The began by entering a ball to the back-row setter and had her dig to the middle of the court so that their left back libero can bump set either pin hitter. After several reps of that, they went to a two-hitter rotation and tried out some creative out of system options for when their setter is in front row.

System Note: They attempted to connect on a slide to the middle and a back-row pipe with their libero bump setting. After some initial skepticism on the part of the players, they grew to like it and connected several times.

Culture Note: The way Coach Sayles presented the new ideas was, “let’s experiment with something new that I think could help us.” So often players get easily frustrated when something isn’t perfect right away, but his attitude about it being an experiment allowed them to more easily accept the risk of failure and step out of their comfort zones to try something new.

Next up was some pin hitting versus a double block. These were just simple reps for a time with a DS passing a free ball to a setter who worked on connecting with her pin hitters who worked on scoring versus a well-formed block. Then it was the middles’ turn to hit. Coming from block transition after closing footwork to their front row setter, coach tossed to the setter in a way that made the setter set from different areas. The point being that the middle had to read where the setter was and make a call as to what kind of set she wanted.

QUICK STARTS!!! They immediately set up for couple of games of 6 on 6 with free ball entered to whichever side won the rally. Games were played to 5 and had an urgent feel to them. I love the way it was just stuck in the middle of practice with no preamble. It was clearly something they did often and really enjoyed as it served to break up the monotony of drills and show the need to be able to turn into “game mode” very quickly.

After the “Quick Starts” games, they moved into some serve receive work. The passers were expected to get 12 goods before 2 bad in a row at any time. If they had 2 bad passes in a row, they went back to zero. I really liked the way this put pressure on passers without every mistake being a consequence. Once the receive time was through, it was back to more work for the primary servers as they went for deep corners for a few minutes.

Culture Note: I was really struck by their balanced approach to having performance standards and consequences in practice but allowing for some mistakes. This balance is such a big deal for a coach to find as being too tolerant of mistakes doesn’t push players to their best while on the other hand, gyms that punish for every single mistake lead to players that won’t take risks for fear of failure.

The team took a break to get some water and came back ready to scrimmage. Today’s scrimmage time was a wash game in which a side had to win a rally from serve receive, then from a down ball, then from a free ball to score a point. The focus was on sustaining a high level (having to win 3 rallies in a row to score) rather than just showing flashes of brilliance (no point for just one good play). The level of play was solid on both sides making points hard to come by and you could see some frustration. It was exactly the realization that coach was trying to produce with the set up of the game; you must sustain your level and you don’t get wins for short bursts of good play.

They ended practice by walking through some strategic substitutions they could use going forward like a blocking specialist for a smaller front row setter or a serve specialist in new rotations. This served to not only prepare them in case they did it in a game, it also put out the idea of new opportunities for some players.

Following practice, Coach invited me to sit in on a meeting he was having with his team leaders. I was nervous that they would hold back with a relative stranger in the room, but they all welcomed me in and seemed to value a new voice with fresh eyes and input – or at least they humored me, lol. I was so happy to be able to offer something to such a good friend and was honored by him allowing me to be a part of it.

I had a great time catching up with my friend and watching him and his program in action. My takeaways about what makes him a great coach were easy to find. Coach Sayles is driven by a purpose beyond winning volleyball matches. He’s done a lot of winning, but it’s his level of care for his players that makes him great. They are not cogs in his volleyball program wheel, they are real people with real lives who crave mentorship, direction, and encouragement. He’s there to develop volleyball players, but he uses volleyball to develop people as future spouses, parents, professionals, disciples…positive members of society. He’s exactly the type of coach you want your kid to have at some point in their life. Grove City College is so lucky to have him coming on board. His high-level experience combined with his heart for people will be such a blessing to his new school!